Mega projects in the Amazon

This is the best book about the development in the Amazon I´ve read in years. In «Megaproyectos en la Amazonía» anthropologist Paul E. Little makes en excellent analysis about the current geopolitical and socio-environmental trends in the Amazon. Its not (yet) published in English, but you can read the English excecutive summary and download the original here. 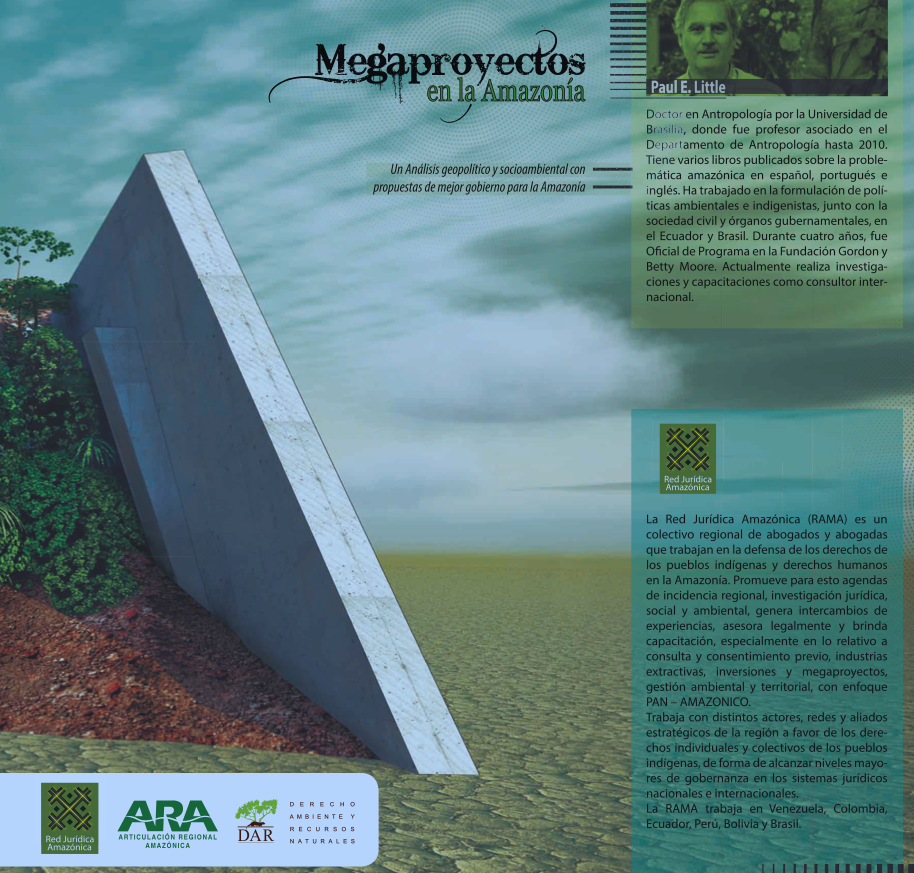 Go to download the original report via the site of the mapping network RAISG here.

I´m currenty writing a report for Rainforest Forest Norway (RFN) about human rights and infigenous rights in the Amazon. In the search for understanding the new developments in the region in the 21st Century, this study is by far the best I have come across. I warmly reccommend it to everybody who wants to get the big picture of what´s going on in the Amazon. These are some of the questions you will learn more about:

Excecutive summary in English, with some extra headings added by me for easy reading:

Mega Projects in the Amazon

Intense global demand for commodities and energy has led to the rapid expansion of monocultures for grains and biofuels and of large-scale hydroelectric dams and mining activities throughout the entire Amazon Basin, transforming it into a new global economic frontier. One of the most significant changes in this wave of Amazonian frontier expansion is that outside interventions, particularly mega-development projects, are being planned and built at a pan-Amazonian scale. In addition, the magnitude of the socioenvironmental impacts caused by these projects are of a qualitatively higher order than those of prior waves of frontier expansion due to the size and geographical range of the projects, the large number of them under simultaneous construction and the enormous amount of capital invested in them.

The first decade of the 21st century experienced a major restructuring of the financing of development projects in Amazonia, stemming from the economic crisis of the industrialized countries, together with the continued growth of the emerging economies, notably the so-called BRICS (Brazil, Russia, India, China and South Africa). During this same decade, Brazil and China forged new national development strategies based in the policies of the globalization of national companies and the establishment of regional hegemonic spaces dominated by their national capital investments. The Brazilian National Economic and Social Development Bank (BNDES) and the Chinese Development Bank grew rapidly in this period and became the largest investors and creditors of mega-development projects in Amazonia.

Two major “types” of mega-development projects are analyzed in this study: infrastructure projects and extractive projects. Mega-infrastructure projects operate primarily with public capital within the framework of bi-lateral agreements between countries and, as such, their processes of decision- making become part of the public arena for debate. Mega- extractive projects, on the other hand, usually operate within the sphere of private capital, which is regulated by free-trade treaties and agreements, and the principal instruments for public control are the concession and contracting processes. In spite of these differences, both types of projects are currently experiencing a phase of rapid expansion and all indications point to the continuation of this trend in the coming years.

The rapid expansion of the Brazilian economy has generated a growing internal demand for electricity, which in turn has stimulated the Brazilian government to embark on an ambitious program of building hydroelectric dams throughout Amazonia. The Andean countries have also adopted a strategy to increase the generation of hydroelectricity and these policies have gained the interest of foreign investors, particularly from Brazil and China. A total of 17 large-scale hydroelectric dams with a generating capacity of over 1500 MW are currently projected for Amazonia, along with hundreds of mid-size dams. Underlying this wave of dam building lays the strategy of controlling the flow of water in a river from its source to its mouth through the construction of numerous dams along its course.

Large-scale extractive projects are increasingly becoming a crucial part of the export and trade policies of Amazonian countries and one of the principal sources of government revenue. The expansion of the hydrocarbon industry in Amazonia is concentrated in the Andean countries, where 263 of the 327 petroleum concessions are located. Only 25% of this total is currently in the production phase, thereby indicating the enormous potential for future expansion of this sector.

The expansion of the mining sector has been even faster than that of the hydrocarbon sector and is dominated by a small number of large multinational corporations. The mining sector extracts a multiplicity of mineral resources – gold, silver, iron ore, copper, bauxite, tin, titanium, vanadium and kaolin, among others – and is much more disperse than the hydrocarbon sector, which has generated a greater number of micro-regional centers of impact. There are a total of 52,974 mining concessions in Amazonia which cover 1,628,850 km2 or 21% of the Amazon Basin. Brazil houses approximately 80% of these concessions, with Peru occupying second place at 11%.

This study identifies four primary socioenvironmental impacts that mega-development projects are generating at a pan-Amazonian scale: 1) The forced industrialization of the jungle; 2) The territorial reorganization of Amazonia; 3) The loss of biodiversity and forest degradation; and 4) The potential collapse of the hydrological function of the basin. In addition to these pan-Amazonian impacts, one must add a series of others that are most readily expressed at the micro-regional scale: 5) Destruction of the livelihoods of indigenous peoples and traditional communities; 6) The damming of rivers and the structural changes in hydrological regimes that it provokes; and 7) Rapid and disarticulated urban growth which produces economic and social marginalization.

The weight of these socioenvironmental impacts is distributed in an extremely unequal manner. The majority of the benefits derived from the construction of mega-development projects accrue to economic and political actors external to Amazonia, such as large multinational corporations, the administrative apparatus of national governments and financial institutions. The majority of negative impacts of these same mega-development projects are borne by indigenous peoples, who suffer from the invasion of their territories, and local communities, which suffer from the proliferation of serious social, health and sanitation problems.

The actions of distinct social groups for the defense of their rights and of the biological world has led to their constitution as political actors who have developed differing sets of agendas for change. Three of these agendas are analyzed here: the environmental agenda, led by international conservationists; the rights agenda, led by indigenous peoples; and the labor agenda, led by unions. The relationships between the environmental and the rights agendas over the past three decades have fluctuated between political alliances, on one hand, and open conflict, on the other. Meanwhile, the efforts of the thousands of workers at development projects for gaining better working and living conditions has, up to now, not been linked to the environmental and the rights agendas, since these workers are inexorably tied to the very projects which are destroying in the region.

This study presents a proposal for an alternative development model based in the practices and lessons of the peoples of Amazonia geared towards meeting their needs and aspirations, instead of those of outside economic interests. In order to achieve an Amazoncentric development, an endogenous, pan-Amazonian vision of change capable of channeling the diverse claims of Amazonian social movements into a cohesive unit needs to be built. The tactics of political action to be employed in the construction of this pan-Amazonian agenda vary widely and range from active participation in the formulation of public policies to political mobilization and confrontation.

One Response to Mega projects in the Amazon