After the presidential election in October, most domestic and international media described Brazil as a ”divided” or ”riven” country. I strongly disagree. Brazil is more united today than it has been for several decades. 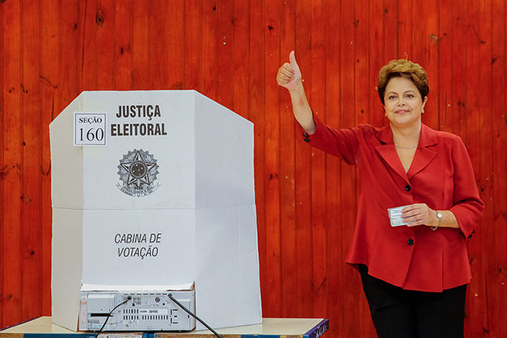 It was a rollercoaster campaign, as The Economist put it. It really was. Both Marina Silva and Aécio Neves were leading the polls for several weeks, but in the end Dilma Rousseff had a tight victory: 51,6% for the sitting president vs. 48,4% for her challenger Aécio Neves.

“A riven country” was The Economist´s headline the day after the election, and the same analysis was widespread in Brazilian and international media, including Norwegian state broadcaster NRK and our main daily newspaper Aftenposten. But is it true?

Why do they claim Brazil is divided?

Three arguments were common. Most media observed the narrow election result and made a direct translation of that to Brazil being split in two: One part pro-Dilma and one part pro-Aécio.

Another argument looked into the geographical distribution of votes, and pointed to the fact that Dilma won the north and northeast, while Aécio won in the south and southeast. 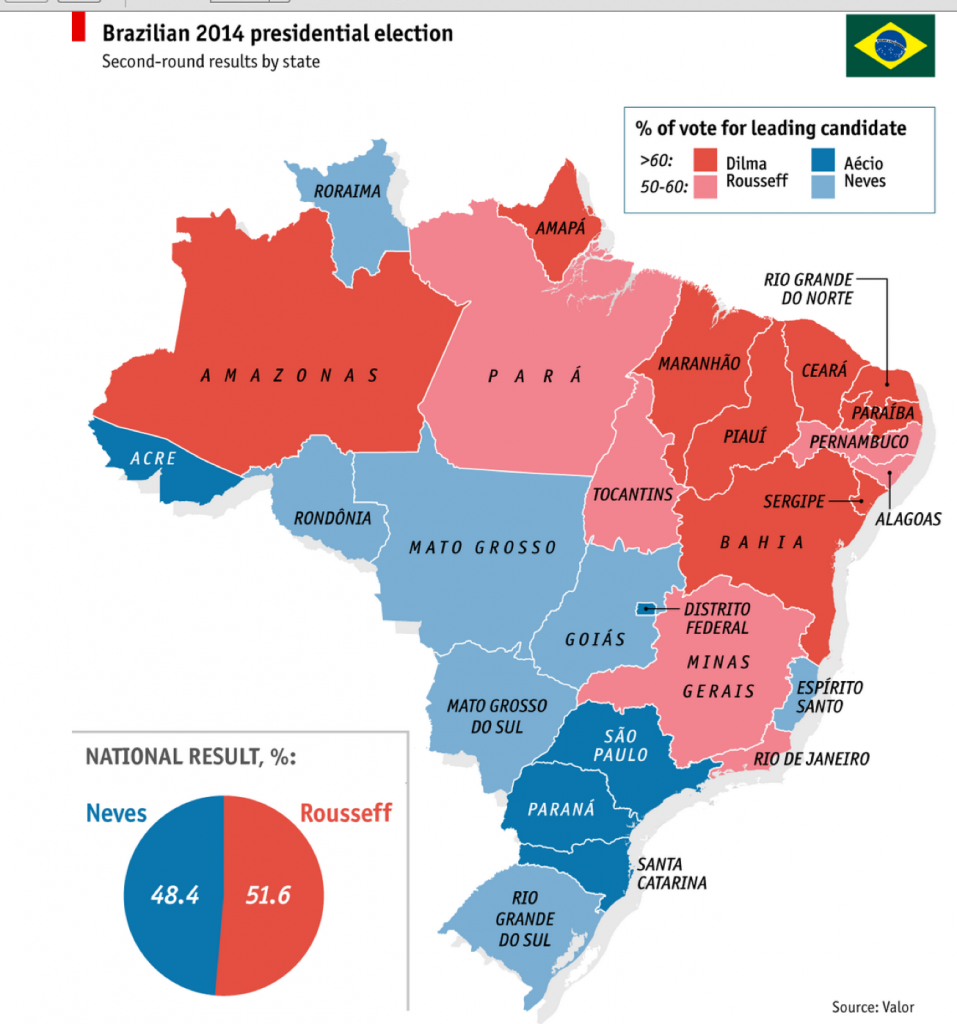 The voting results for Dilma Rousseff and Aécio Neves split down to state level. Source: The Economist/Valor

The third argument took the geographical distribution further and explained the socioeconomic differences between the northern and southern Brazil. That highlighted the pattern of the poor (in the north) voting for Dilma and the rich (in the south) for Aécio.

All of these observations and arguments are correct, but they do not make the country or the society divided. At least not more so than before.

Why Brazil is less divided than before

First: Brazil is indeed a divided country. According to many socioeconomic indicators, Brazil is among the most unequal countries in the world. The income gap between rich and poor is colossal. While the rich enjoy some of the world’s best universities, the education levels for the poor are just sad. Public health services are poor, while the rich put the country on top of the list for plastic surgeries.

The rich – poor divide often follows the black – white shades. The more black your skin is, the higher is the probability of you being poor, living in a favela, not studying, being in jail, etc.

But here´s the deal: On all of these statistics, Brazil has become a less divided country the last 15 years.

Today, every child is school. The public health service is better than it used to be. The minimum wage has doubled in value since the early 2000´s. The poor have become less poor faster than the rich have become richer. The inequality levels in Brazil are falling.

Brazil is STILL one of the most unequal countries in the world, but it´s going in the right direction.

Concentrating on Brazil in the final stage of a presidential election, you risk missing the bigger picture. In the context of Latin America´s modern history, the picture of the “divided” Brazil fades.

Compare Brazil to four of the other major Latin American countries: Mexico, Colombia, Venezuela and Argentina. The very legitimacy of Mexico´s government is being challenged by the drug war and violence. Colombia is about to leave decades of internal war, also linked to drugs. In Venezuela, the fronts between the Chavez/Maduro governments and the opposition are like ice, and in Argentina, the weak economy might lead the country into a situation resembling the 2001 breakdown with three presidents in a week. Compared to this, Brazil looks quite nice.

Also compared to its own modern history, Brazil as of 2014 is indeed a quite nice country. Fifty years ago, a coup led to one of the continent´s longest living military dictatorships. Thirty years ago, Brazil´s population was denied the right to direct presidential elections by the regime friendly Congress. Twenty years ago, the economy was infested by hyperinflation and massive international debt. This is all history.

Just the fact that Brazil just had its 7th free, presidential elections in a row is a remarkable achievement. Adding to that: The left, headed by the PT, has won the last four and is heading for 16 consecutive years in power. And they are not seriously being threatened by military or any other intervention from the right. Try to imagine this in ANY Latin American coutry the last century…

It would not have been tolerated, either by the local elites, or by the USA. Today, times are different. And Brazil is a more united country than it used to be, not more divided.

One Response to Brazil – The united country